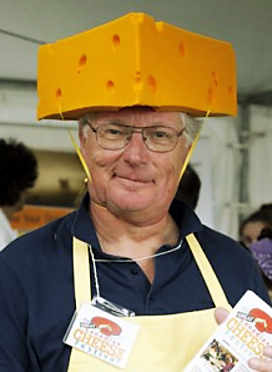 Georgs Kolesnikovs first fell in love with artisan cheese when he tasted Oka as a teenager, when the Trappists still made it.

As founder and director of The Great Canadian Cheese Festival, he has extensive experience in event management and promotion—and a lifelong passion for cheese.

Georgs publishes the popular cheese blog CheeseLover.ca. Twice a year, he makes cheese at home. Once a year, he visits major cheese festivals in North America and Europe, looking for ideas on how to improve The Great Canadian Cheese Festival.

His most recent project was to launch an independent Canadian cheese judging and competition in 2014 covering all milks: cow, goat, sheep and water buffalo. Like the Festival, Canadian Cheese Awards/Le Concours des fromages fins canadiens is open only to Canadian cheesemakers who turn the pure milk of Canadian cows, goats, sheep and water buffalo into cheese, using no artificial colours, flavours or preservatives, and no modified milk ingredients.

Georgs founded The Great Canadian Cheese Festival in 2011 after being disappointed with how little cheese there was to be found at popular shows in Ontario that billed themselves as “wine and cheese” events. By its second year, the Cheese Festival became the biggest artisan cheese show in Canada. Today, attracting more than 5,000 lovers of cheese, food and drink, it’s the biggest artisan cheese event in North America.

Future projects include the development of The Great Canadian Cheese Festival WEST in British Columbia as well as a new food and drink event in Toronto called Fat & Fermented.

Georgs has a passion for cheese—as well as boating and motorcycling.

In the 1980s, he was president of Great American Media Inc., a company he founded in California. It produced The Great American Motorcycle Show series in all major markets in the United States, in venues ranging from Madison Square Garden to the Los Angeles Convention Center. Under his direction, the company also produced the U.S. Speedsailing Grands Prix in Los Angeles and San Francisco.

After returning to Canada, he founded Water World Productions and created the West Marine Trawler Fest series of boating festivals in major maritime markets in the U.S. which he directed in the 1990s.

A lifelong journalist, with experience in newspapers, magazines and radio, Georgs publishes Circumnavigator and Glory Road. In the 1970s, he founded Cycle Canada and Moto Journal. In the 1990s, he was publisher of Up Here.

An event like The Great Canadian Cheese Festival cannot be produced without many willing hands and smart minds. Georgs considers himself lucky to have associates and friends he can count on: